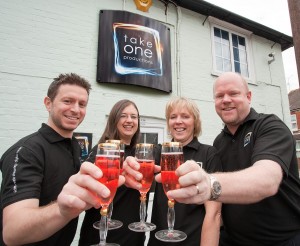 It is not all bad news out there, Take One Productions a Horsham based video and digital media company tell how they have survived the recession and plan to go onwards and upwards!

There is no doubt the last two years have been a very challenging time for businesses worldwide, Take One are no exception. A family run company, set up in 1996 by a brother and sister team, Carrie and Nick, they gradually grew to a nine strong team.

Over a ten year period, between the millennium and March 2010 their work escalated to be about 90% in the public sector. This creative team had developed such a good reputation in Government communications and had worked with about 40 Government Departments and Non Departmental Public Bodies. Carrie Cort the Marketing Director at Take One says “We did not mean to get so many eggs in one basket, but when we were recommended and referred on to other departments you don’t say no”. She continued “We had contracts with The Department for International Development (DFID); Environment, Food and Rural Affairs (Defra) and Education (DfE). Then in March 2010 marketing and communications in Government was frozen and very little Government work has been seen since that date”.

So in the middle of a double dip recession this innovative company have turned their full attention to the private and third sectors, building up about 70% of their lost client base. Carrie continues “We now have an impressive and ever expanding private and third sector client base and quite diverse projects, for example GVA are a leading commercial property management and investment development consultants, we have worked with Cancer Research, Crawley Town Football Club and lots of individuals wanting simple web videos”.

The company has just rebranded and launched its new website, which includes a Learning Zone http://www.takeoneproductions.co.uk/learning-zone/ where people can download guides to help them produce or commission video communication solutions. The guides include:

10 Tips for Presenting to Camera, 10 Tips for Writing a Video Production Brief and a guide with Top Tips for Effective Web Video Distribution.

You have got to just get your head down and focus on you, your company and come up with innovative and effective solutions for your clients. We have adapted and changed track quickly. Wasn’t it Charles Darwin who said It is not the strongest of the species that survive, nor the most intelligent, but the one most responsive to change.

Get In Touch With Us

If you would like to talk to us about a project, we would love to hear from you.